So here’s a few notes from SXSWinteractive 2012 – a selection of talks and some of the striking bits of that one-of-a-kind festival/conference.

The Science of Good Design: A Dangerous Idea
A talk by Ben McAllister, the Assoc Creative Dir at frog design in Austin, an extended version of his write-up in the Atlantic Magazine riffing off the idea that The Research is used as a weapon in design and management. This, he says, reduces science to scientism, providing easy answers, helping you sell the idea, instead of using research to test hypothesis and – essentially – getting answers that give birth to a host of new questions. Or, as Richard Feynman put it:
Richard Feynman on uncertainty

Busting the Myth: Natural Input Requires Learning
Daniel Wigdor and Kay Hofmeester telling the tale of how the Windows 8 touch interaction patterns came into being – giving detailed accounts of trial and error. Take for example the action of checking and object in tile view vs. moving it about. Using icons or text didn’t work when communicating how to switch between those modes – so they introduced a speed bump: when you pull an object up to a certain point, you meet resistance (you can’t pull any further). If you release now, the item is checked. If you pull further, overcoming the resistance, the object is released and may be moved across the screen freely. This, they, found, is an easily learnable mode of interaction that is also easily transferable to list-views – i.e.: the things they were looking for.
For more details, look at the Springbook writeup. 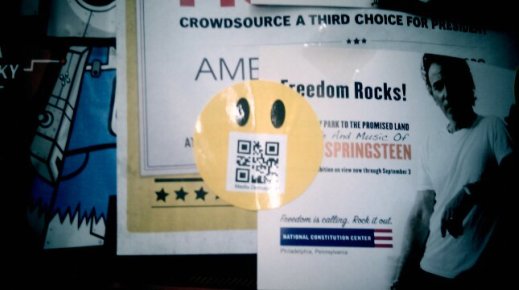 Homeless Hotspots
Not so much a talk as the talk of the media: BBH Labs publicity stunt turned classic SDI that made some of Austin’s homeless into Hotspots. Read The Verge on the subject and note what’s written on the T-Shirt.

DeadSoci.al “is a tool that allows anyone to create scheduled messages. These are distributed across each user’s personal social network accounts after they die.”

(Quoted from the flyer presented at SXSW)

SXSW wouldn’t be SXSW without the ultimate Bruce Sterling (inofficial closing) talk. Man’s a great talk, so why don’t I let you listen:

So, that’s it for now – except that I’ve got two more detailed write ups for you:

The Secret Lives of Links

A Brief History of the Complete Redesign of Google

and last – but certainly not least – this little suggestion for spending your time doing a little citizen science. Worried about climate change? Here you can help us understand it better: